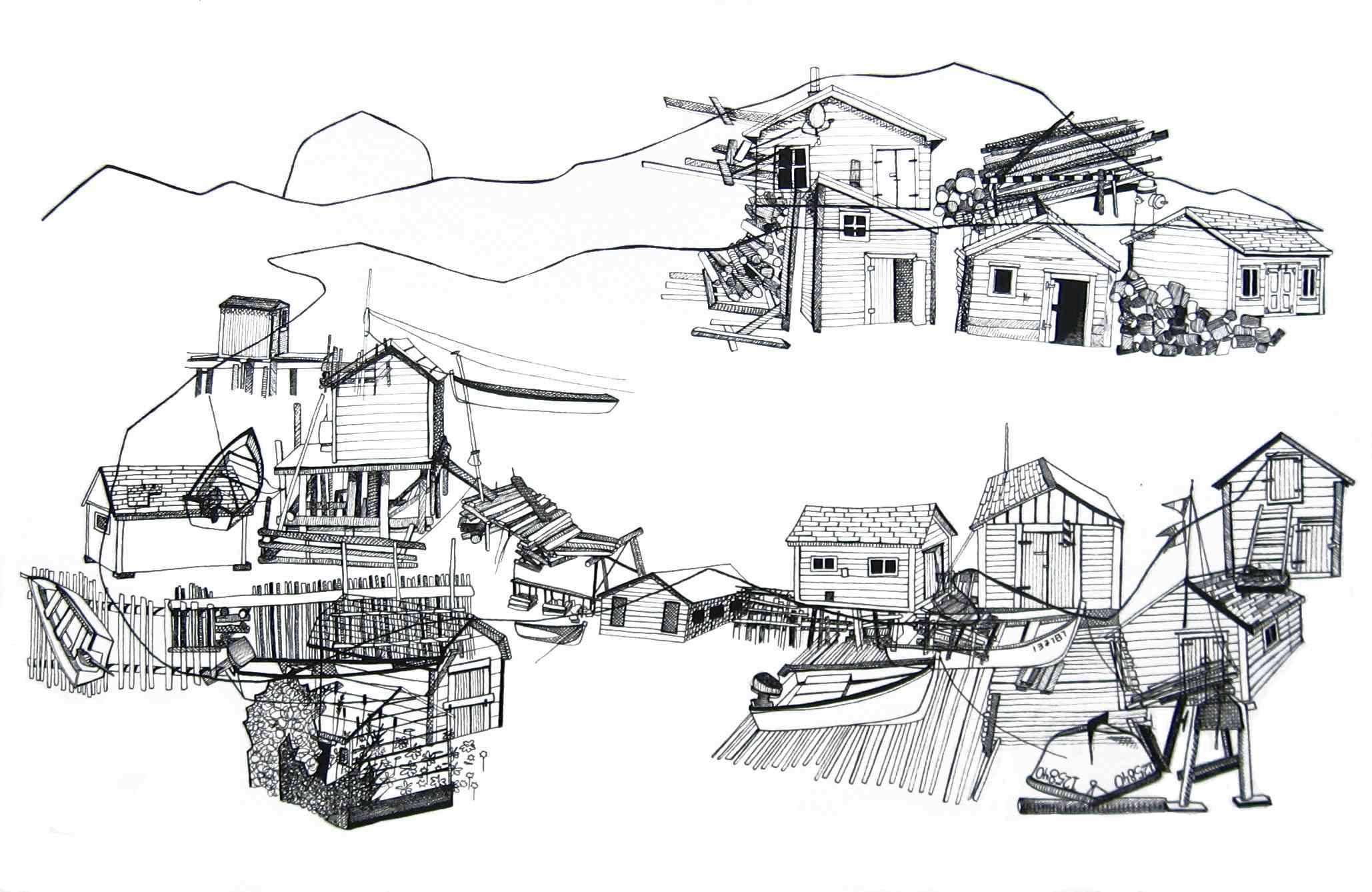 i figured out that i really liked drawing on a small island in newfoundland. i got to do an art residency there through my college because it wasn't a very arts-oriented school at the time and there wasn't a lot of competition for this cool opportunity to get to try and do art and walk around in the most beautiful place, where there are caribou and puffins and icebergs. 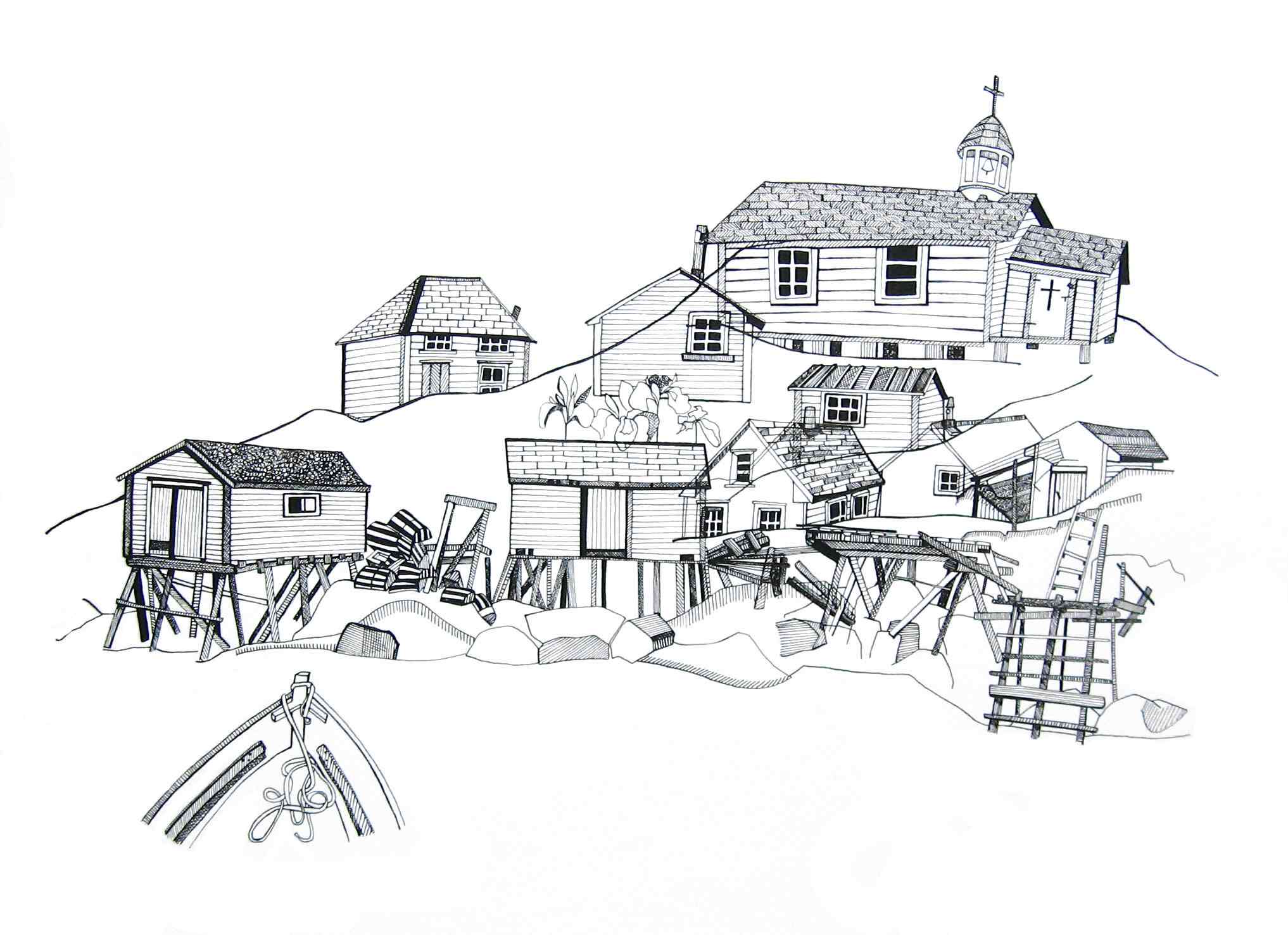 i coulnd't really figure out how to depict the incredible landscape there, but i found deep peace and satisfaction in drawing the buildings. later this feeling changed, but at that moment i thought i could be happy if i just got to draw forever. 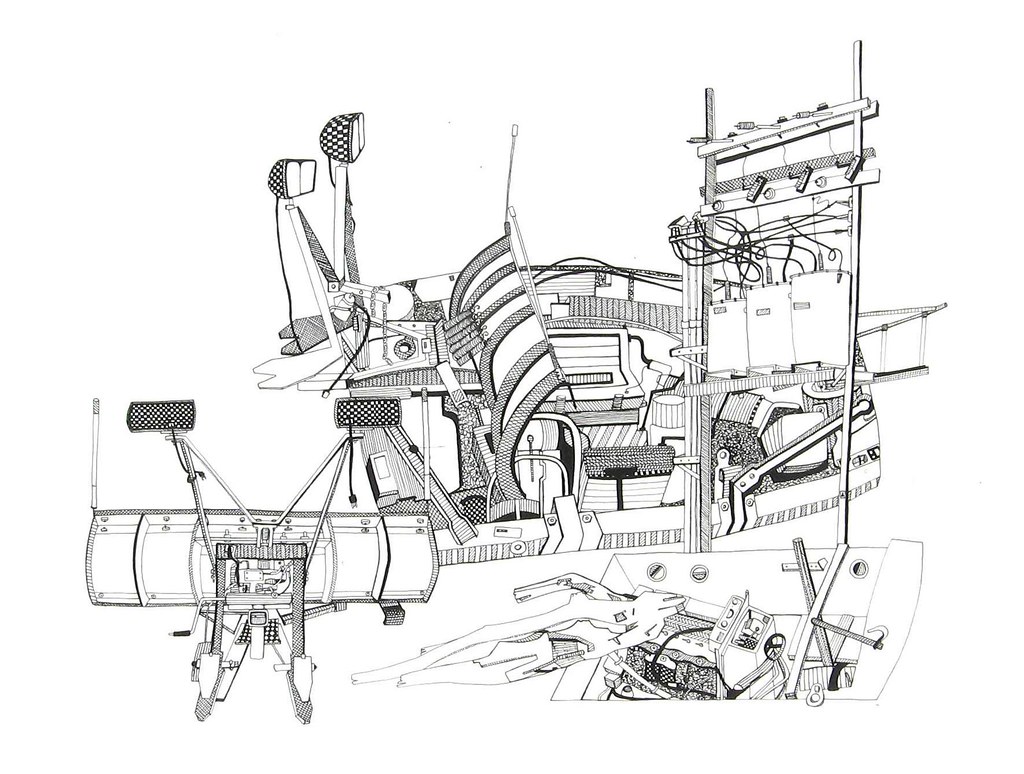 i got to go there again the following year and this time drew even more of the different stuff that i saw there, trying obtusely to represent this place. 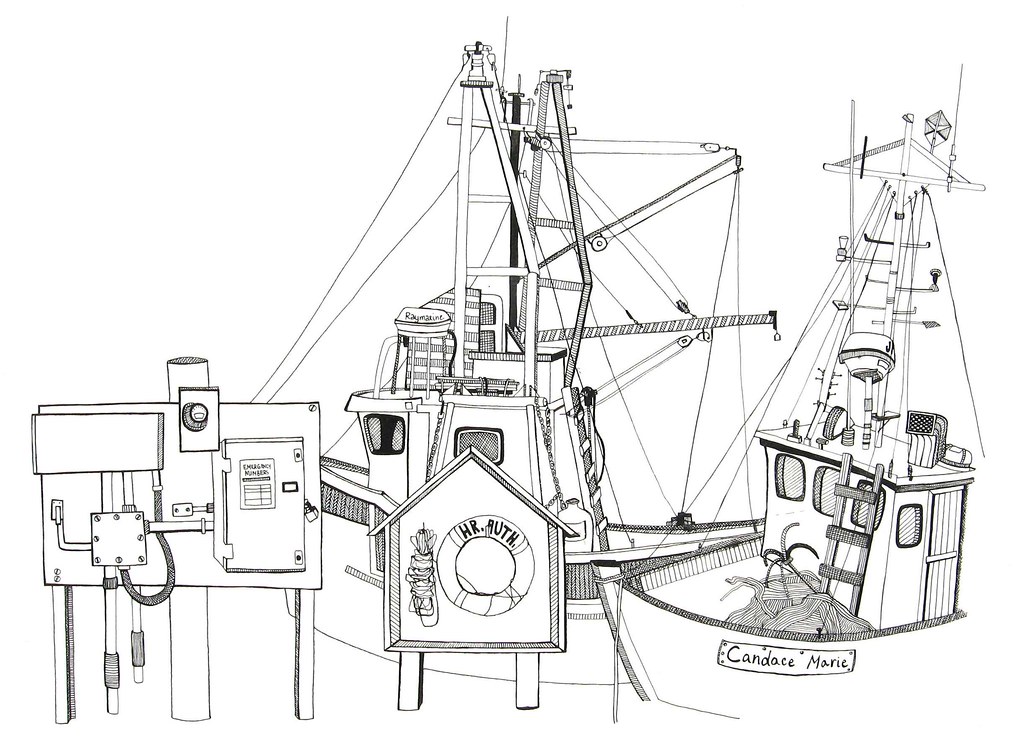 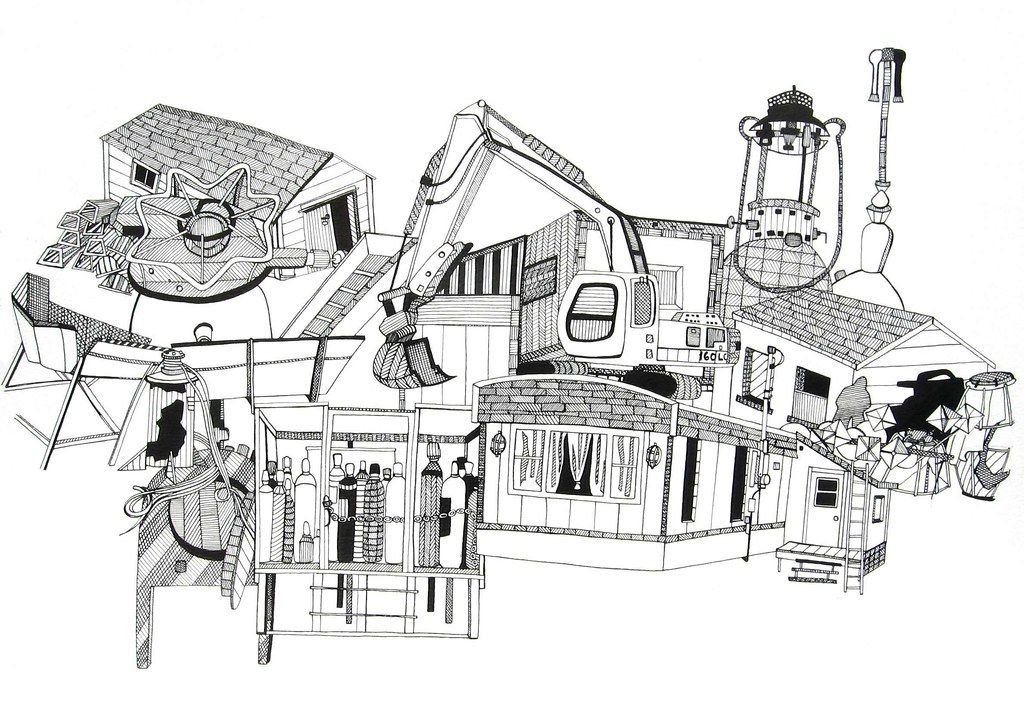 this one felt like the most successful bid at that project - a baby who lived on the island enthusiastically pointed at the drawing and made his baby sound for the escavator that he recognized from his real world. 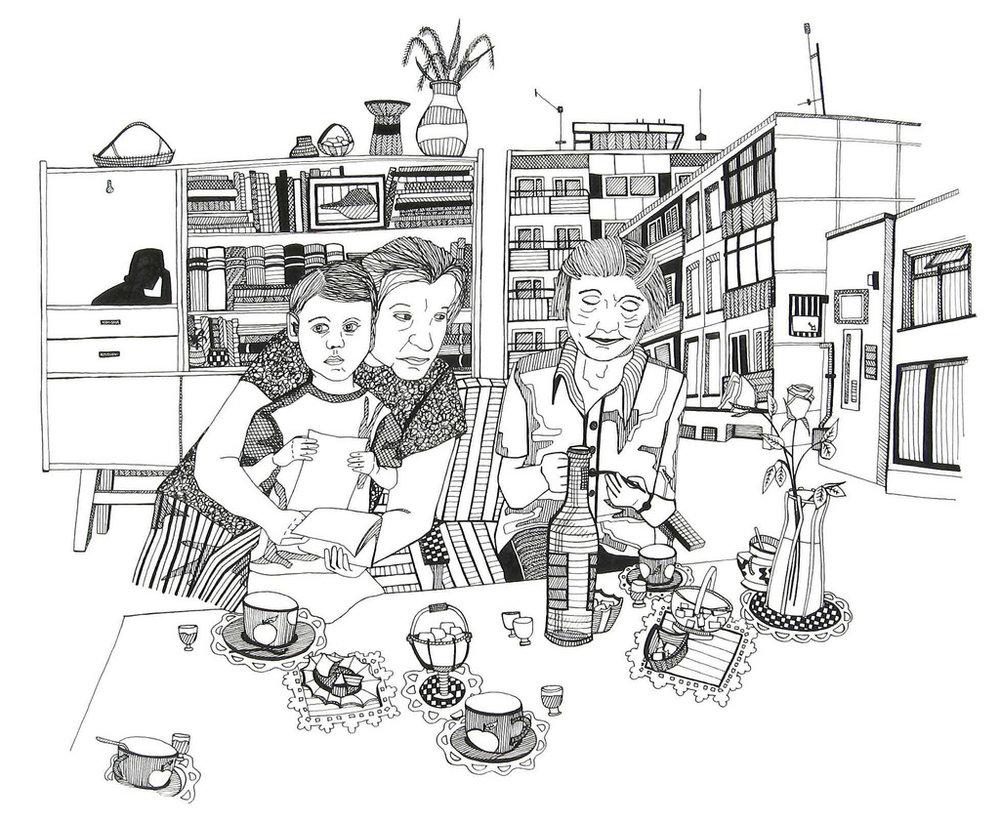 i was also trying to draw other places and people in them. this is a drawing of my grandma and her friend in my childhood home. when grandma's friend saw the drawing she said something like, "who is that old hag?" - an early example of the theme in my work where people are not able to recognize themselves in my drawings of them. 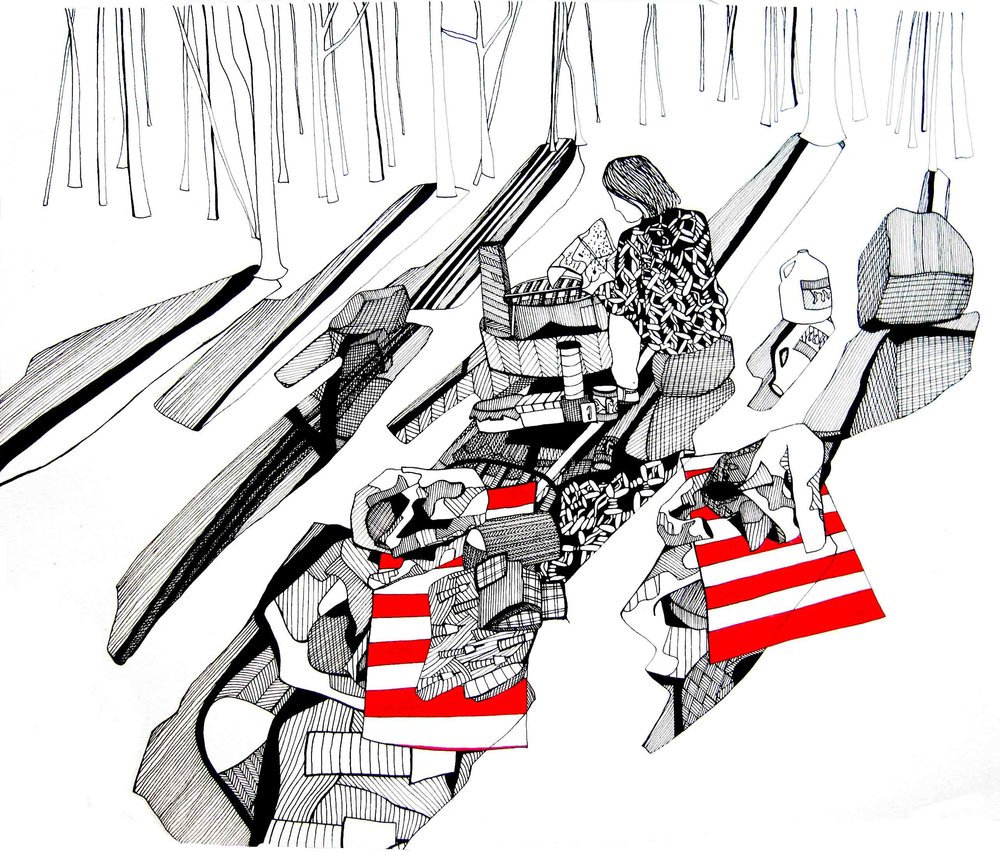 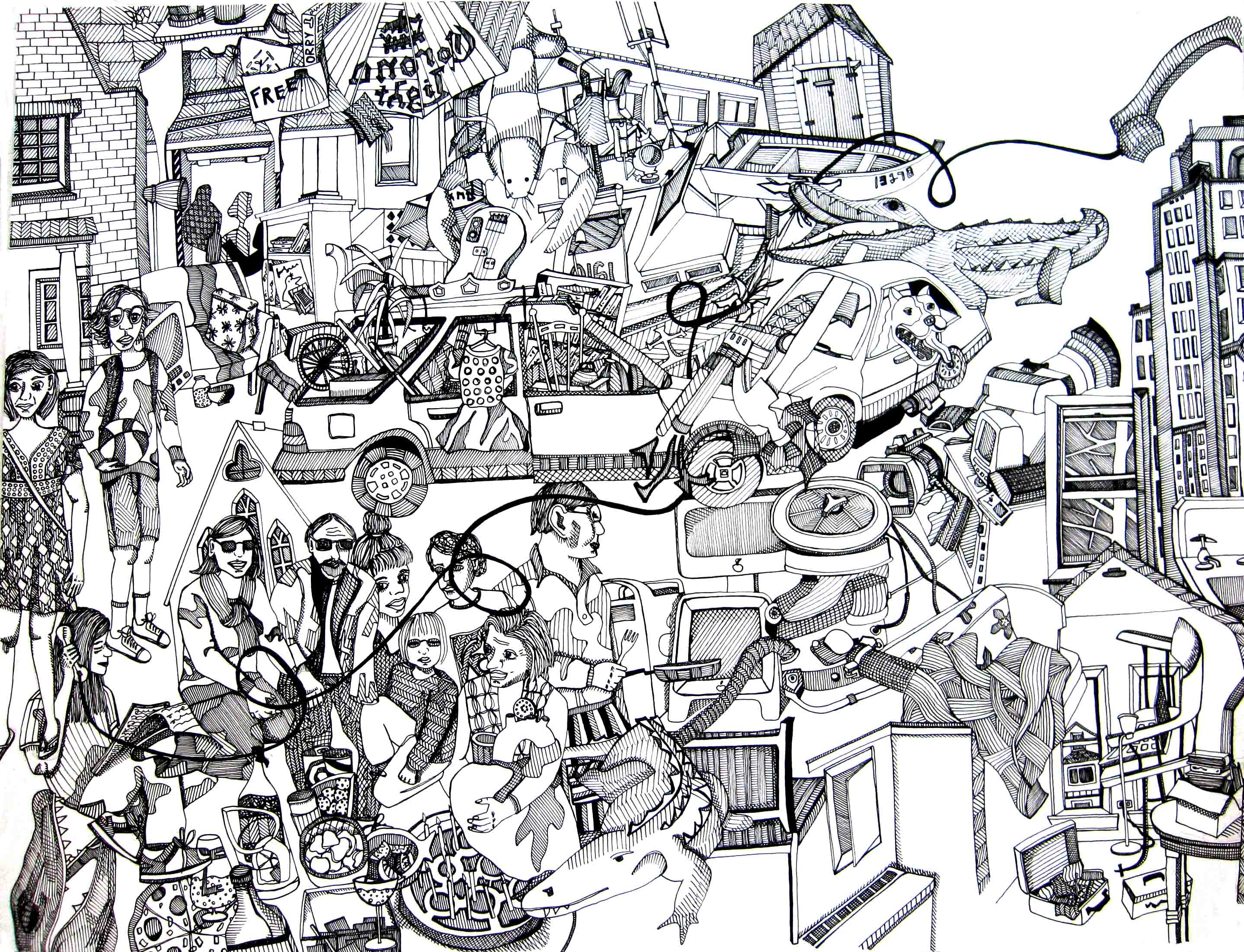 this is a drawing about a challenging year and all the different places i lived and went in it, and some of the key things that happened. 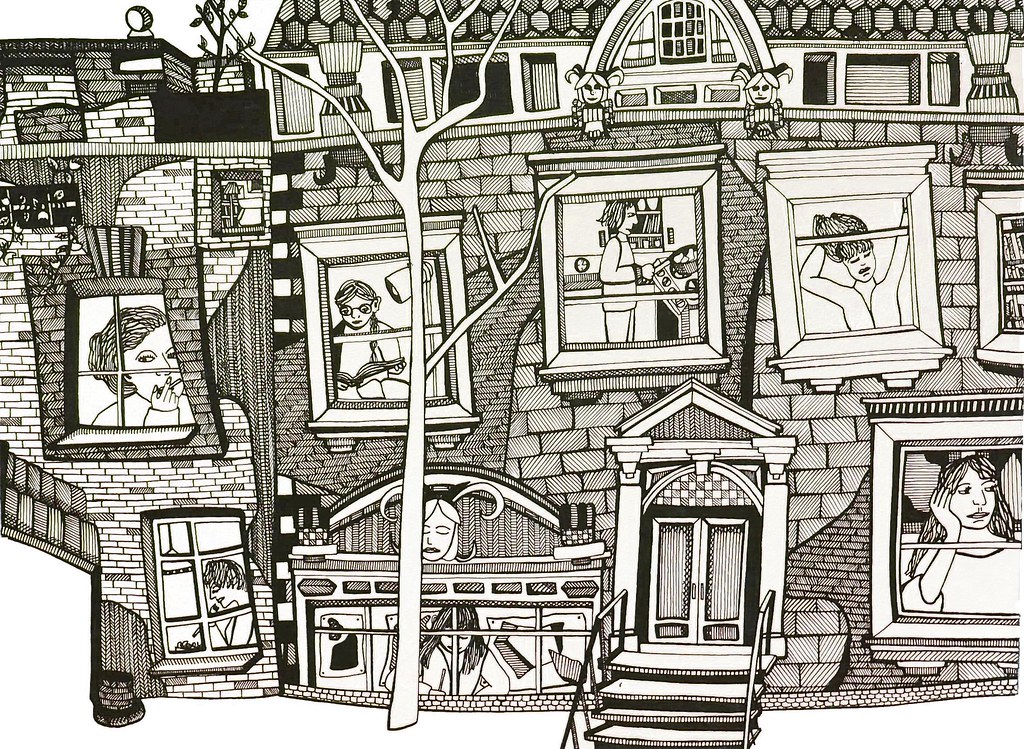 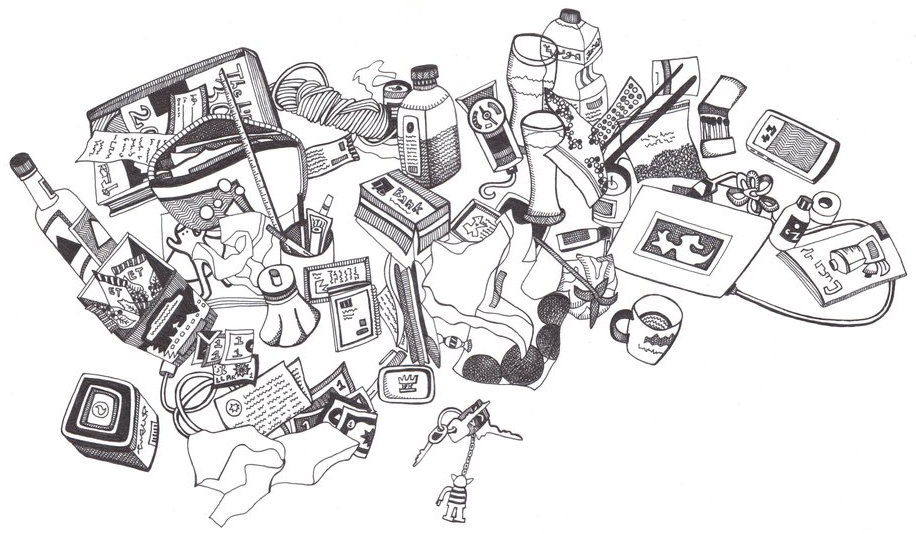 when i left buffalo, where i lived for 3 years, this is what my kitchen table looked like while i was working on moving. 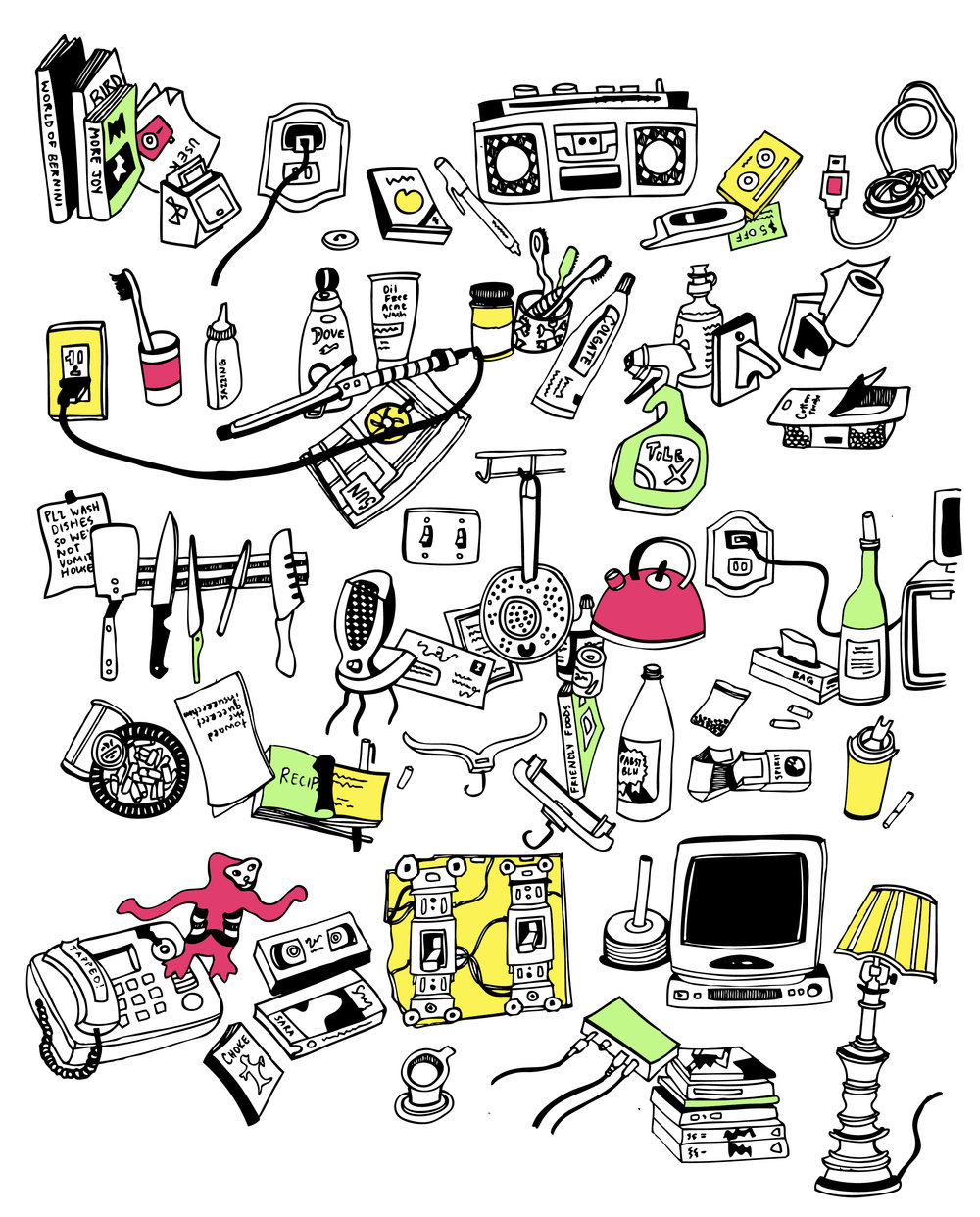 one of the places i moved to for a short while after buffalo was asheville, north carolina. this is a bunch of different stuff that could be found in a house there, where i lived with a billion other people. we were afraid about becoming vomit house by having a gross kitchen. stuff is everywhere you go.


for several years thereafter i wasn't really making elaborate big drawings unless they were for some specific purpose. in recent years i've made one here and there. they seem to feature puppets and other relics from religion or the theater. 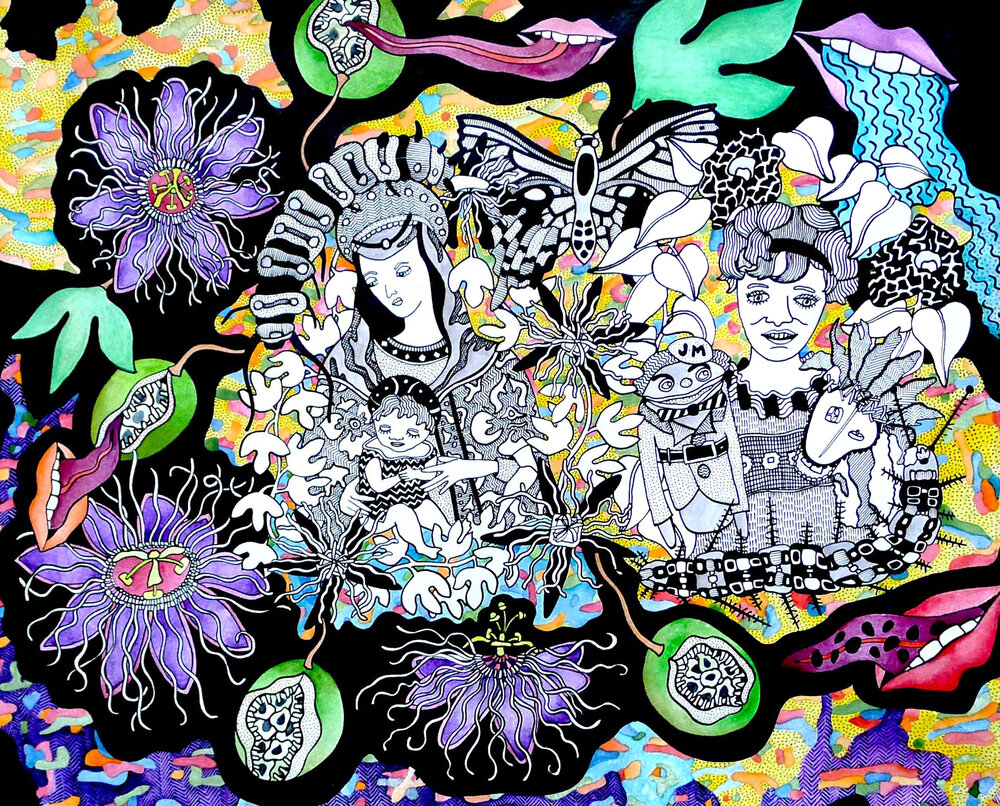 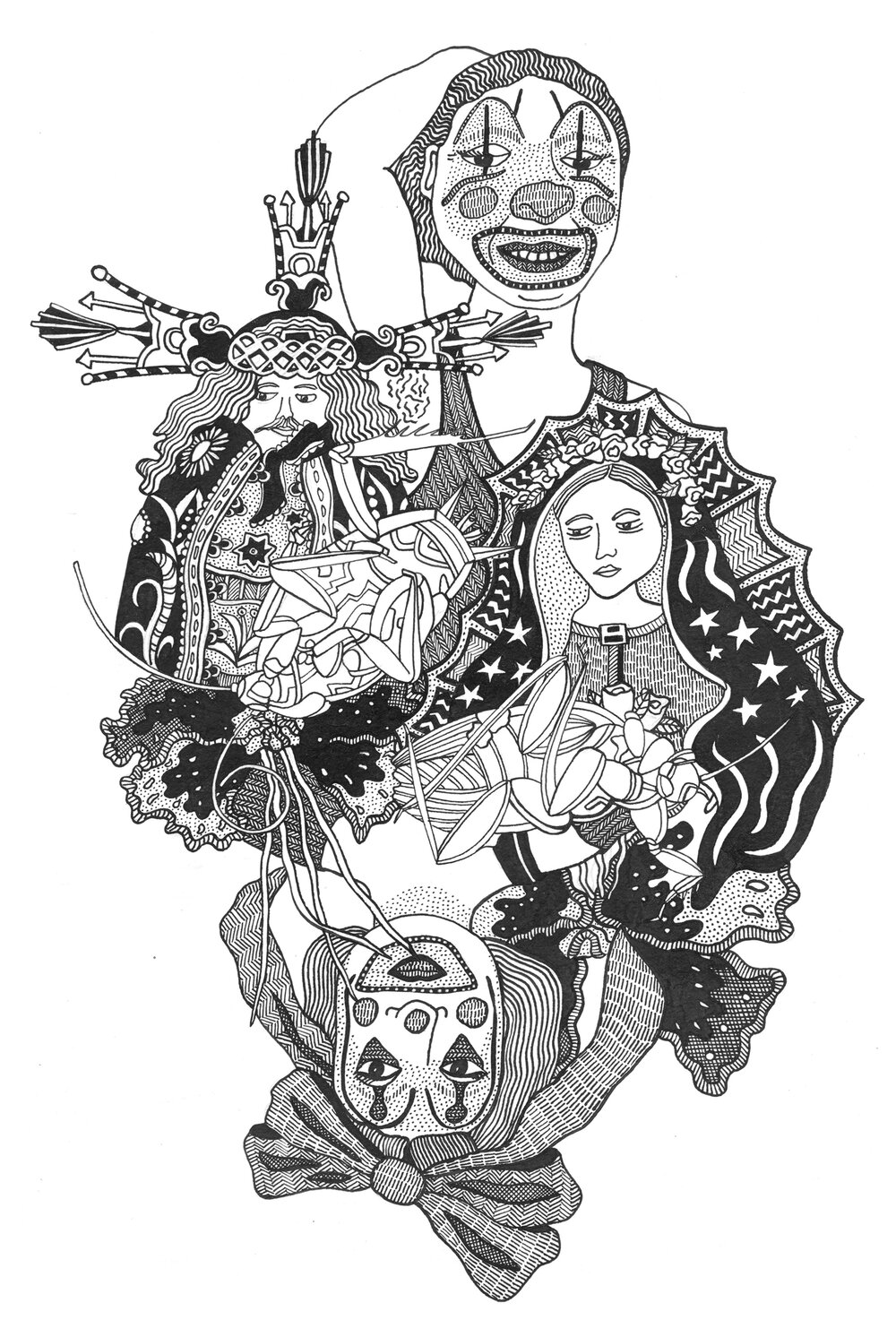 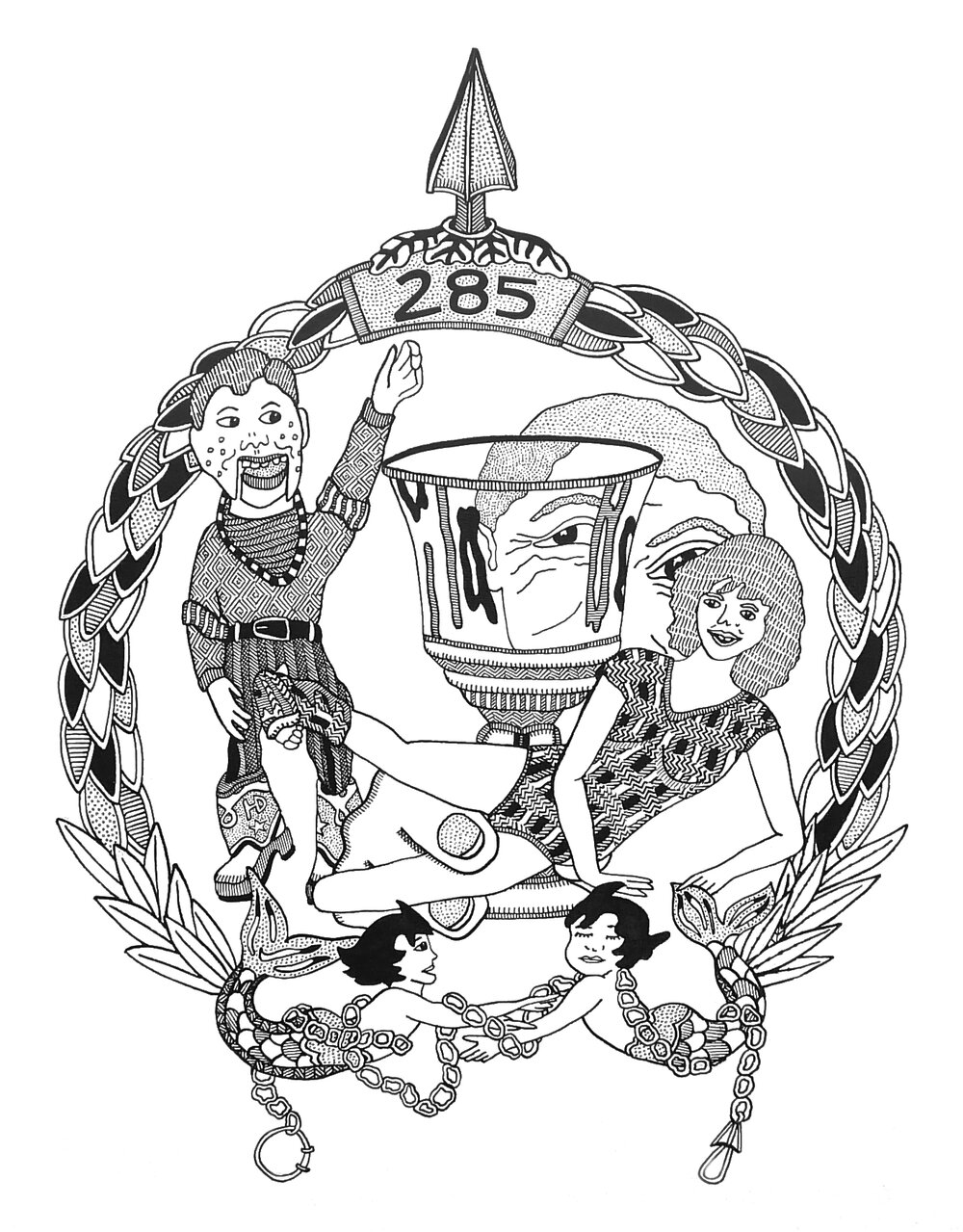 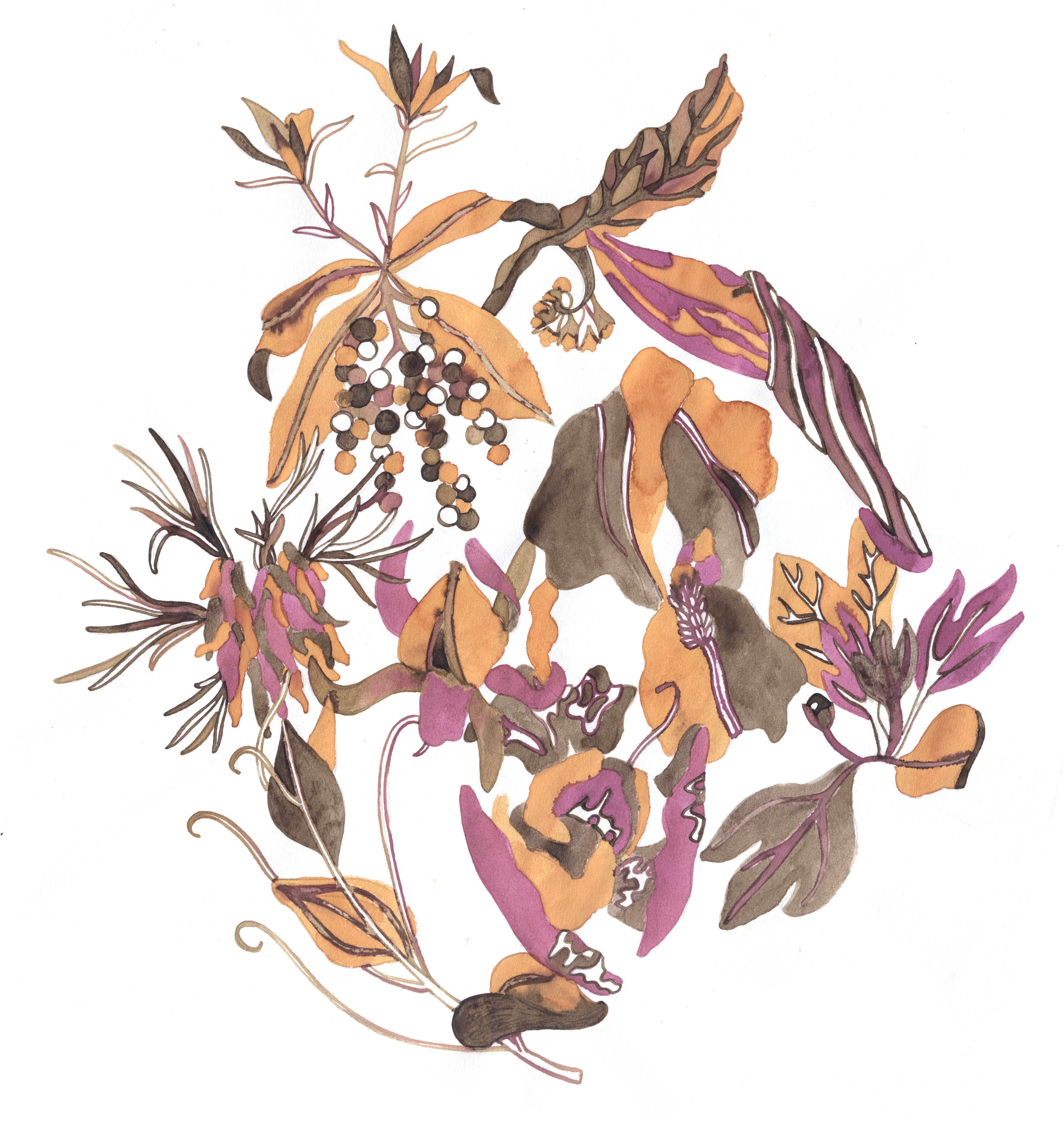 in 2021 i began experimenting with making inks from easily accessible and bountiful plants. this drawing was made using ink made from black walnut, poke berries, and cosmos flowers.